Do you know the Doberman exists in 5 different colors?

Do you know which Doberman colors are recognized or restricted by kennel clubs?

Most people know the Doberman as a black dog with brown markings. This is the most popular and most often seen hair color. But the Doberman is also born in a few other colors.

The 5 different coat colors are:

The most common Doberman hair color is obviously the black and tan, sometimes called black and rust, or black and brown. In a healthy dog, it looks shiny and sleek.

The next most widely seen color is the red Doberman, which is a light brownish-red hair coloring. Sometimes red Dobermans are called “chocolate Dobermans”. There are different shades of red hair, ranging from a copper tone to a dark chocolate. Adding to the confusion, the color names also vary around the world, some Europeans call red Dobermans, brown.

Below you can see the traditional black and tan Doberman color alongside a red Doberman. 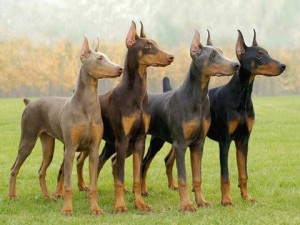 The Doberman dog is also seen in a fawn color and a blue color which is seen much less often.

These last two Doberman colors, the greys, and fawns are sometimes discouraged from breeding. They are considered a disqualifying fault in some dog shows. Even so, it’s felt that these dogs are not inferior to the reds or blacks if good breeding is present.

It’s common knowledge that these white Dobermans tend to have health problems and behavioral issues. They can have skin and eyesight problems, like photosensitivity. Because it has poor vision, the dog may be unsure of its surroundings. This can lead to aggressive behavior, like fear biting. As a result, some countries have banned the breeding of this dog mutation, and breeders are encouraged not to breed for this color. It is seen as inhumane to the dog due to the potential for serious health concerns.

The white Doberman looks interesting but breeders should avoid introducing these dogs into their bloodlines. Also, consumers and dog lovers need to be educated about the health concerns of these dogs. Although these white Dobermans look beautiful, these dogs should not command higher dog prices. Especially when they may need more medical care. If someone wants a white dog there are better white breeds to choose from.

Having said all this, if you do find a white Doberman rescue dog or a white Doberman from a breeder with a good reputation, who does health testing, please give them a chance. Not all white Dobermans are problematic and they can still make great companions. Just remember buyer beware.

In a survey on this website, we asked visitors which color was their favorite.

14,568 votes were collected over five years.

The winner as expected was the black & tan color with 62% of the votes, with the reds in second place with 24%. And it’s interesting that blue Dobermans slightly beat out fawn Dobermans by 2%.

Whatever color your Doberman is, remember they have short hair and are sensitive to cold temperatures. Get them a fun winter dog sweater if you can.

Please see more with the summary list All black doberman pinscher best and most detailed compiled by vestasoft.org

Dog Breeds August 30, 2022
In the article, we will help you find out more information and knowledge about can dogs eat strawberry jam best…

Dog Breeds August 30, 2022
Through this article vestasoft.org would like to share with you information and knowledge about my dog ate 10 mg phenylephrine…

Dog Breeds August 30, 2022
Below is the list can dogs eat corn chips best

Top 4 will my dog calm down after being spayed

Dog Breeds August 30, 2022
In the article, we will help you find out more information and knowledge about will my dog calm down after…

Dog Breeds August 30, 2022
In the article, we will help you find out more information and knowledge about treat mosquito bites on dogs best…

Top 4 will getting my dog spayed calm her down

Dog Breeds August 30, 2022
Through this article vestasoft.org would like to share with you information and knowledge about will getting my dog spayed calm…